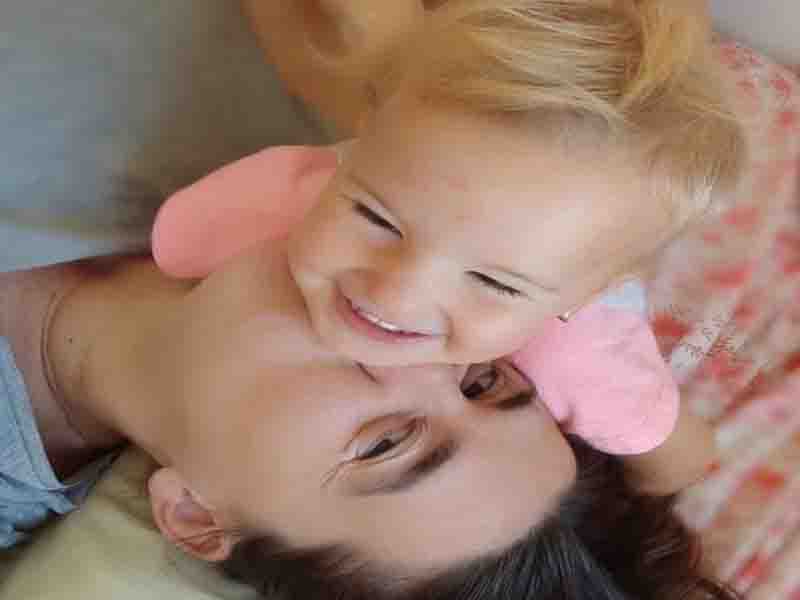 In Spain, there are 29,000 children with diabetes , a chronic disease that appears when the pancreas does not produce enough insulin or when the body does not use the insulin it produces effectively.

One of those children is Inés, a little girl of just over two years old who debuted with type 1 diabetes in April 2021 , when she was just 17 months old.

We have spoken with Tatiana, her mother, who since then has lived focused on her daughter and fights from her social networks to give visibility to this chronic disease in childhood.

When the disease debuts in the first months of life

Inés was born in Barcelona in December 2019, three months before the pandemic broke out. This meant that at first, the symptoms that the girl presented were even confused with COVID .

“In April 2021, Inés began with a serious infection in her mouth . She had many sores and bloody wounds. She barely ate, she was listless and very tired. They told me it could be COVID, but I was convinced that it was not that.”

“When he recovered from this infection, another similar episode appeared in the diaper area. The skin was red, irritated and full of sores . He had a very bad time.”

” My daughter stopped eating solids . She only asked for breast and water. She drank constantly and peed very frequently . So much so, that at night her diapers overflowed”

Tatiana sensed that something was happening to her daughter , so she decided to write to her sister Estefanía, who is a doctor and was working in Germany at the time, to tell her what was happening to Inés:

“I wrote to my sister one night, while I was breastfeeding Inés. The girl made a very strange noise and her breathing was very agitated . As if she had just run a marathon.”

“When my sister heard the audio of Inés’s breathing and heard me tell her everything we had been through in recent weeks, she told me that she suspected she might have diabetes , and she advised me to go to the emergency room with the girl ”

But at that time Tatiana was alone at home with her four children, because her husband was away, so she preferred to wait until the next day to take her to the pediatrician .

“My daughter was about to go into a hyperglycemic coma”

When the pediatrician saw Inés, he ordered an emergency blood test, and in a short time they knew that the little girl’s blood sugar levels were close to 500 ; “Almost on the verge of a hyperglycemic coma ,” says her mother.

The girl was urgently referred to the Sant Joan de Deu hospital, where a medical team immediately turned to her case:

“As soon as we entered the hospital door, everything was rushed, races, punctures, nerves and a lot of anguish”

Tatiana remembers those moments as the worst and most distressing of her life. She further explains that her guilt quickly washed over her:

“Suddenly I began to remember everyday things that made me feel very bad , like the glass of milk with sugar that I had given him for breakfast that day, or the lollipop that he had a few days ago and that could have made him not know wake up the next day”

“It also distressed me to hear my daughter scream every time she was pricked, and on top of that I had to help hold her down so the doctors could do their job. My daughter called me for help, and it broke my heart “

The doctors decided to admit Inés to the ICU to stabilize her blood sugar levels and monitor her closely. As you can imagine, that fact collapsed her mother:

“There was also the terrible circumstance that months before I had been in that same ICU accompanying some friends who had just lost their son. It was terrible to remember those moments and see myself again in that place, now with my own daughter”

During the time they were in the hospital, Tatiana received emotional support and advice from the doctors.

” When a child is diagnosed with diabetes , doctors have to make sure that parents understand all the details of this disease, and train them so that they know what to do when their child is discharged “

“They explained to us what carbohydrates are, which foods are slow-absorbing and which are fast-absorbing, what we should do if Inés’ blood sugar went up or down… In addition, they referred us to an endocrinologist, who would be the professional who would I was going to continue from that moment”

At the same time, Tatiana decided to seek support on social networks, as she needed to find other mothers who were experiencing the same situation as her. In fact, this is one of the recommendations that she offers to families of children newly diagnosed with diabetes :

“Purely medical information is necessary, but so is finding other parents of children the same age as yours who have diabetes. Because in them you will not only find empathy, understanding and support, but also very useful advice to face the day to day”

Before the diagnosis, little Inés led a life that radically changed the day she was discharged.

To begin with, his parents should check his blood sugar levels several times a day , and act accordingly each time.

At first, these measurements were made by pricking Inés on the little finger with a lancet, and depositing the drop of blood on a sensor that gave the result of the measurement.

But for a few months the girl has had a small device inserted in the upper part of her buttock and connected via Bluetooth with an external device. This device offers information every five minutes, thus avoiding continuous finger pricks.

IN BABIES AND MORE

Without punctures or invasive methods: they develop a bracelet that measures the blood glucose of diabetic children

When blood sugar is low , it is necessary to raise the levels by offering a glass of sugar water, although as his mother explains “it is not always easy to get him to drink it, because a drop in sugar causes a lot of discomfort.”

When the sugar rises , insulin must be administered immediately by injection , a gesture that, according to Tatiana, “causes suffering in any mother”

” We have to inject Inés with insulin about six times a day . No one likes the injections, least of all the children. The injections hurt, sometimes they bleed, leave bruises, lumps under the skin or even small wounds. And no parents or mother wants to cause suffering to her child “

In the future it will be necessary to fit Inés with an insulin pump, a system that, although it will help to reduce punctures per day, will require her to wear a device connected to a catheter that she will have to monitor and change periodically to avoid blockages.

Regarding food and lifestyle , Inés must eat several times a day and avoid certain foods, so instead of forbidding them, Tatiana has chosen not to buy them:

“The things that Inés cannot take, I prefer not to be at home. For the rest, I try to ensure that my daughter eats everything -although always controlling the quantities- and has a life as normal as possible, within the care required by her disease”

Next September Inés will start school for the first time , and her mother confesses that thinking about it makes her uneasy and has many doubts. And it is that she wishes she could take her daughter to the same school where her brothers study, but currently the center does not have a school nurse

“I have been taking care of my daughter’s body and soul for a year, and having to pass that responsibility on to the school is something that worries and terrifies me”

A four-legged angel to accompany Agnes

Recently, the family decided to launch a Gofundme campaign to get a medical alert dog from the Canem Foundation to accompany Inés and detect changes in sugar levels.

“People with diabetes suffer from constant ups and downs in blood sugar that can be very dangerous. We have had several scares, so we would like to have the help of a canine guardian angel to always accompany Inés , take care of her and notify us in time of your potential emergencies.

Tatiana explains that these dogs are trained for a period of approximately six months, and are capable of detecting both epileptic seizures and high or low sugar levels before they occur.

Specifically, changes in sugar levels are detected by the animal between 20 and 30 minutes earlier , avoiding serious complications and fainting .

IN BABIES AND MORE

The economic cost of getting one of these dogs is very high, so when a family cannot afford it and meets all the requirements, it becomes part of a scholarship program so that the animal is assigned to them.

The campaign carried out by Inés’ family was a complete success, and thanks to the generosity of the people who love them, in just 24 hours they managed to raise all the money necessary for the little girl to have her medical alert dog very soon .

With the remaining money obtained, Tatiana wants to make more children happy, so she has decided to donate it to the Foundation and thanks to this, another family has obtained their puppy, which will be delivered the same day as Inés.

“Childhood diabetes exists and we must give it visibility”

Getting to know Tatiana and Inés has allowed us to learn more about this disease , and put names and faces to a reality that   thousands of families in our country experience daily .

By sharing her story, Tatiana wants to create social awareness and make visible the day-to-day life of this disease, without taboos, without fear and without drama.

” I do not like people to say that my daughter is “poor” . My daughter is a girl with a chronic illness that, fortunately, has treatment in the century in which we live. This treatment allows her to lead a practically normal life. “

“Inés is a happy girl, eager to learn, enjoy and play. I want her to have a positive relationship with her illness, to integrate it and normalize it. That’s why I like to spread the word about our day to day on my social media “